The Worst Journey in the World: With Scott in Antarctica 1910-1913 (Paperback) 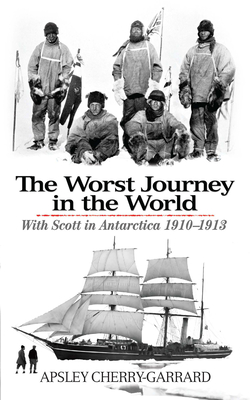 The Worst Journey in the World is to travel writing what War and Peace is to the novel . . . a masterpiece.--The New York Review of Books
When people ask me, 'What is your favorite travel book?' I nearly always name this book. It is about courage, misery, starvation, heroism, exploration, discovery, and friendship. --Paul Theroux
National Geographic Adventure magazine hailed this volume as the #1 greatest adventure book of all time. Published in 1922 by an expedition survivor, it recounts the riveting tale of Robert Falcon Scott's ill-fated race to the South Pole. Apsley Cherry-Garrard, the youngest member of the party, offers sensitive characterizations of each of his companions. Their journal entries complement his narrative, providing vivid perspectives on the expedition's dangers and hardships as well as its inspiring examples of optimism, strength, and selflessness.
Hoping to prove a missing link between reptiles and birds, the author and his companions traveled through the dead of Antarctic winter to the remote breeding grounds of the Emperor Penguin. They crossed a frozen sea in utter darkness, dragging an 800-pound sledge through blizzards, howling winds, and average temperatures of 60 below zero. This worst journey was followed by the disastrous trek to the South Pole. Cherry-Garrard's compelling account constitutes a moving testament to Scott and to the other men of the expedition. This new edition of the adventure classic features several pages of vintage photographs.

Apsley Cherry-Garrard (1886-1959) served as a biologist for the ill-fated Antarctic expedition. Haunted by his experiences, the English explorer suffered from clinical depression for the rest of his life and was encouraged by his friend George Bernard Shaw to write this memoir as a form of therapy.