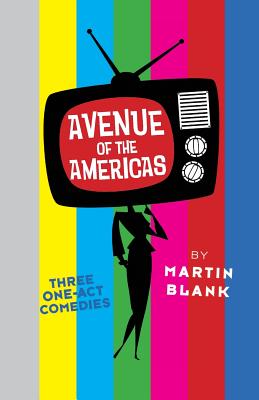 These three plays can be done individually or presented together. "Avenue of the Americas" 2W 3M - Comedy - 50 minutes - A 30-year-old woman on the lam from a New Jersey mental institution becomes the queen of Madison Avenue. Her advertising campaigns are wildly popular, winning awards and blue chip clients-as well as the heart of New York's most eligible bachelor. Still, her commercials wreak havoc with her boss, the Catholic Church, and certain cat owners. Avenue of the Americas is a dark, comic ride that asks: how far would you go to have it all? "Driving Green" 1W 1M - Comedy - 10 minutes - A politically opposite married couple tries to survive going green and a morning commute without killing each other. "Read My Lips" 5W 2M - Comedy - 30 minutes - A play with dance in which a young man comes to terms with the loss of the grandmother that raised him.

Martin Blank (playwright) is the author of ten plays, the most recent of which, the full-length spy thriller The Law of Return, was produced Off-Broadway at the Fourth Street Theater. He has received new play commissions from the Maryland State Arts Council, American Jewish Theater, and Georgetown Theatre Company and is published by American Ensemble Books and Smith and Kraus. He has served as Artistic Associate for the American Place Theatre, New York City, as well as Literary Manager, Woolly Mammoth Theatre Company, and Founding Artistic Director, Theater J. He attended the University of Maryland and the Yale School of Drama.