END_OF_DOCUMENT_TOKEN_TO_BE_REPLACED

Things You May Find Hidden in My Ear (Paperback) 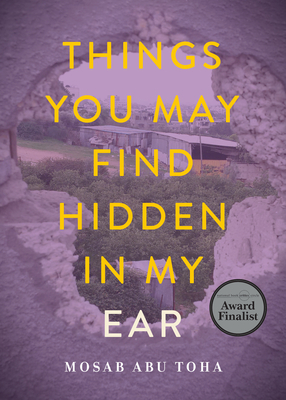 Finalist for the 2022 National Book Critics' Circle Award for Poetry

Winner of a 2022 Palestine Book Award

In this poetry debut Mosab Abu Toha writes about his life under siege in Gaza, first as a child, and then as a young father. A survivor of four brutal military attacks, he bears witness to a grinding cycle of destruction and assault, and yet, his poetry is inspired by a profound humanity.

These poems emerge directly from the experience of growing up and living in constant lockdown, and often under direct attack. Like Gaza itself, they are filled with rubble and the ever-present menace of surveillance drones policing a people unwelcome in their own land, and they are also suffused with the smell of tea, roses in bloom, and the view of the sea at sunset. Children are born, families continue traditions, students attend university, and libraries rise from the ruins as Palestinians go on about their lives, creating beauty and finding new ways to survive.

Accompanied by an in-depth interview (conducted by Ammiel Alcalay) in which Abu Toha discusses life in Gaza, his family origins, and how he came to poetry.

Praise for Things You May Find Hidden in My Ear:

"Mosab Abu Toha is an astonishingly gifted young poet from Gaza, almost a seer with his eloquent lyrical vernacular ... His poems break my heart and awaken it, at the same time. I feel I have been waiting for his work all my life."--Naomi Shihab Nye

"Though forged in the bleak landscape of Gaza, he conjures a radiance that echoes Milosz and Kabir. These poems are like flowers that grow out of bomb craters and Mosab Abu Toha is an astonishing talent to celebrate."--Mary Karr

"Mosab Abu Toha's Things You May Find Hidden in My Ear arrives with such refreshing clarity and voice amidst a sea of immobilizing self-consciousness. It is no great feat to say a complicated thing in a complicated way, but here is a poet who says it plain: 'In Gaza, some of us cannot completely die.' Later, 'This is how we survived.' It's remarkable. This is poetry of the highest order."--Kaveh Akbar

Mosab Abu Toha is a Palestinian poet, scholar, and librarian who was born in Gaza and has spent his life there. A graduate in English language teaching and literature, he taught English at the United Nations Relief and Works Agency (UNRWA) schools in Gaza from 2016 until 2019, and is the founder of the Edward Said Library, Gaza's first English-language library. Things You May Find Hidden in My Ear is his debut book of poems.In 2019-2020, Abu Toha was a Visiting Poet in the Department of Comparative Literature at Harvard University; a Visiting Librarian at Harvard's Houghton Library; and a Religion, Conflict, and Peace Initiative Fellow in the Harvard Divinity School. In 2020, Abu Toha gave talks and readings at the University of Pennsylvania, Temple University, and the University of Arizona. He also spoke at the American Library Association (ALA) Midwinter Meeting held in Philadelphia in January 2020. In October 2021, University of Notre Dame's Literatures, Annihilation, Exile, and Resistance lecture series hosted Abu Toha to speak about his poetry and work in Gaza.Abu Toha is a columnist for Arrowsmith Press, and his writings from Gaza have also appeared in The Nation and Literary Hub. His poems have been published on the Poetry Foundation's website, in Poetry Magazine, Banipal, Solstice, The Markaz Review, The New Arab, Peripheries, and other journals.