So Many Thrones: A Game of Thrones Parody Novel (Paperback) 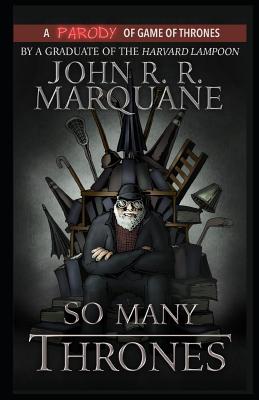 From the author of The Candidate in the Rye and a graduate of The Harvard Lampoon, this parody novel is a send-up of Game of Thrones, publishing just in time for the series finale.Before the HBO series, and before your friend who has never read a single fantasy series invited you over to watch, remember when you first read those famous words-"Is it just me or is it getting colder outside?"When the King's Right-Hand-Man is murdered, it falls to Sean Bean of Winterville to take his place in Camelot, where the blood pours like wine and climate change is a distant dream. Follow Cat Lady as she relies on the scheming Goldfinger to help solve a murder, her son Raisin-Bran as physical injury destines him for magical powers, and test-tube baby Juan Doe as he joins the Border Patrol, dedicated to denying climate change and preventing those awful Canadians from ever invading from beyond the wall. And now for the first time follow new point-of-view characters including George R. R. Martin himself as he struggles to preserve the artistic integrity of A Song of Ice and Fire against the demands of HBO executives hungry for syndication. Will he finish his epic series before it is too late? Will winter ever, eventually, at some point come?