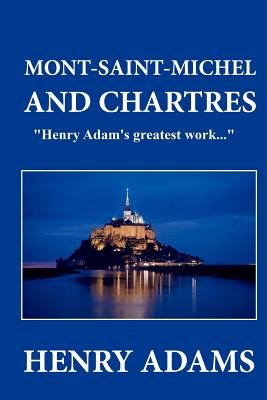 Henry Adam's lucid writing style and his insights are impressive, and Mont-Saint-Michel and Chartres should be read by every supposedly "educated" individual. Adams deals with complex topics such as Gothic architecture, medieval poetry and mysticism, and scholastic philosophy with clarity and ease. The early sections of Adam's classic compare the church of Mont Saint Michel with the Catholic view of St. Michel who was the militant perfect example of the Medieval hero defending the Catholic Church against all enemies. The comparison with this church with that of Chartres which was the exempler of God's mercy via St. Mary is insightful and fascinating reading. Such embellishment of St. Mary or Notre Dame is further investigated in Adam's book by his careful treatment of Medieval Poetry. His translations of Medieval French and Latin are good and give those who are not familiar with these languages a better understanding of both the poetry and the Medieval devotion to St. Mary. Much of this poetry was mystical, and Adams demonstrates the attempt of St. Francis and the Franciscans to use such mystical thought in their missionary efforts to help the very poor. St. Francis' mysticism is revealed in Adam's translation of St. Francis' poem titled Brother Sun and Sister Moon. Henry Adams then compares and contrasts medieval mysticism, which bordered on pantheism, with scholastic philosophy. Adams gives the reader an insight to scholastic debate when he summarizes the debate between William of Champaux and Peter Abelard(1079-1142). Here Adams demonstrates his understanding of how students and masters argued and learned. He also shows the careful balance the Catholic authorities tried to impose between reasoned debate and heresy. The last section of the book deals with the Angelic Doctor, St. Thomas Aquinas (1225-1274). Adams careful treatment of Aquinas' thought is worth the price of the book. Adams gives the Angelic Doctor high praise for both his clear thinking and liberality. Adams also effectively deals with the liberality of the Medieval Catholic authorities who canonized so many men whose views were apparently contradictory. Henry Adam's Mont-Saint-Michel and Chartres is intellectual history at its best. The book deals with complex ideas and views in an attractive literary style which holds the readers' interest.

Henry Brooks Adams (1838-1918; normally called Henry Adams) was an American journalist, historian, academic and novelist. He is best-known for his autobiographical book, The Education of Henry Adams. He was a member of the Adams political family. Both his paternal grandfather, John Quincy Adams, and great grandfather, John Adams, one of the most prominent among the Founding Fathers, had been U.S. Presidents, his maternal grandfather was a millionaire, and another great grandfather, Nathaniel Gorham, signed the Constitution. After his graduation from Harvard University in 1858, he embarked on a Grand Tour of Europe, during which he also attended lectures in civil law at the University of Berlin. He was initiated into the Phi Kappa Psi Fraternity as an honorary member at the 1893 Columbian Exposition by Harris J. Ryan, a judge for the exhibit on electrical engineering. Through that organization, he was a member of the Irving Literary Society. Adams's The History of the United States of America (1801 to 1817) has been called "a neglected masterpiece." In the 1880s, Adams also wrote two novels. He is credited as the author of Democracy, which was published anonymously in 1880 and immediately became popular. (Only after Adams's death did his publisher reveal Adams's authorship.) His other novel, published under the nom de plume of Frances Snow Compton, was Esther, whose eponymous heroine was believed to be modeled after his wife. He published The Education of Henry Adams in 1907, in a small private edition for selected friends. For Adams, the Virgin Mary was a symbol of the best of the old world, as the dynamo was a representative of modernity. It was only following Adams's death that The Education was made available to the general public, in an edition issued by the Massachusetts Historical Society. It ranked first on the Modern Library's 1998 list of 100 Best Nonfiction Books and was named the best book of the twentieth century by the Intercollegiate Studies Institute, a conservative organization that promotes classical education. It was awarded the Pulitzer Prize in 1919.