Her Gates Will Never Be Shut (Hardcover) 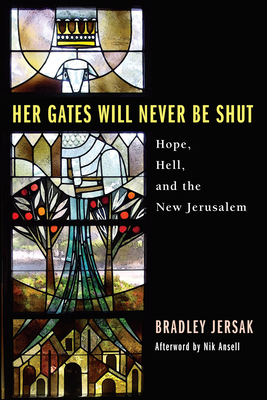 Description: Everlasting hell and divine judgment, a lake of fire and brimstone--these mainstays of evangelical tradition have come under fire once again in recent decades. Would the God of love revealed by Jesus really consign the vast majority of humankind to a destiny of eternal, conscious torment? Is divine mercy bound by the demands of justice? How can anyone presume to know who is saved from the flames and who is not? Reacting to presumptions in like manner, others write off the fiery images of final judgment altogether. If there is a God who loves us, then surely all are welcome into the heavenly kingdom, regardless of their beliefs or behaviors in this life. Yet, given the sheer volume of threat rhetoric in the Scriptures and the wickedness manifest in human history, the pop-universalism of our day sounds more like denial than hope. Mercy triumphs over judgment; it does not skirt it. Her Gates Will Never Be Shut endeavors to reconsider what the Bible and the Church have actually said about hell and hope, noting a breadth of real possibilities that undermines every presumption. The polyphony of perspectives on hell and hope offered by the prophets, apostles, and Jesus humble our obsessive need to harmonize every text into a neat theological system. But they open the door to the eternal hope found in Revelation 21-22: the City whose gates will never be shut; where the Spirit and Bride perpetually invite the thirsty who are outside the city to ""Come, drink of the waters of life."" Endorsements: ""Who are the damned? Who are the saved? The questions have a way of provoking controversy, often quite heated. Brad Jersak, self-identified as an evangelical who accepts the Biblical witness as authoritative, turns the controversy into a conversation, a quiet conversation. He listens. He listens to opposing voices. He listens to Scripture as God's last word on the subject. He listens to the scholars and theologians. Out of the listening something like a 'humility of hope' (Jersak's phrase) begins to replace dogmatisms and we find ourselves part of a conversation with Christian brothers and sisters who are seriously praying for the world's salvation."" --Eugene H. Peterson author of Tell It Slant: A Conversation on the Language of Jesus in His Stories and Prayers ""Deeply grounded in evangelical faith and committed to evangelical categories of theological interpretation, Jersak probes the meaning of 'Final Judgment' in Christian faith and tradition. The phrase, for Jersak, must be kept in quote marks, because he sees that what is 'final' is not 'judgment' but the openness of God. The book traces the way in which Christians, and the author, 'exchange certainty for hope.' In the end the residue of evil will not have the last word; what prevails is the goodness of God's love. Readers will be greatly instructed by this thoughtful book."" --Walter Brueggemann author of Divine Presence Amid Violence (Cascade, 2009) ""Combining theological rigor and pastoral sensitivity Her Gates Will Never Be Shut is sure to push the boundaries of the contemporary theological landscape and expand the theological horizons of scholars, pastors, and lay Christians alike. Grounded, timely, and open--this is evangelical theology at its best."" --Jon Stanley co-editor of ""God is Dead"" and I Don't Feel so Good Myself: Theological Engagements with the New Atheism (Cascade, 2009) About the Contributor(s): Bradley Jersak is an author and seminar speaker based in Abbotsford, British Columbia. He is the author of Can You Hear Me? (2003), Kissing the Leper (2006), and co-editor of Stricken by God? (2007).