The Talisman: A Novel (Paperback) 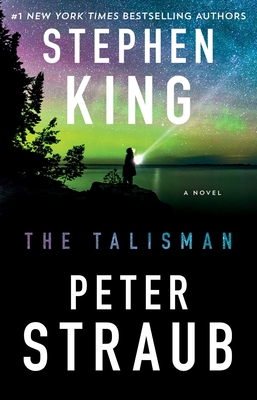 Soon to be a Netflix series!

The iconic, “extraordinary” (The Washington Post) collaboration between bestselling authors Stephen King and Peter Straub—an epic thriller about a young boy’s quest to save his mother’s life.

Jack Sawyer, twelve years old, is about to begin a most fantastic journey, an exalting, terrifying quest for the mystical Talisman—the only thing that can save Jack’s dying mother. But to reach his goal, Jack must make his way not only across the breadth of the United States but also through the wondrous and menacing parallel world of the Territories.

In the Territories, Jack finds another realm, where the air is so sweet and clear a man can smell a radish being pulled from the ground a mile away—and a life can be snuffed out instantly in the continuing struggle between good and evil. Here Jack discovers “Twinners,” reflections of the people he knows on earth—most notably Queen Laura, the Twinner of Jack’s own imperiled mother. As Jack “flips” between worlds, making his way westward toward the redemptive Talisman, a sequence of heart-stopping encounters challenges him at every step.

An unforgettable epic of adventure and resounding triumph, The Talisman is one of the most influential and highly praised works of fantasy ever written.

Stephen King is the author of more than sixty books, all of them worldwide bestsellers. His recent work includes Fairy Tale, Billy Summers, If It Bleeds, The Institute, Elevation, The Outsider, Sleeping Beauties (cowritten with his son Owen King), and the Bill Hodges trilogy: End of Watch, Finders Keepers, and Mr. Mercedes (an Edgar Award winner for Best Novel and a television series streaming on Peacock). His novel 11/22/63 was named a top ten book of 2011 by The New York Times Book Review and won the Los Angeles Times Book Prize for Mystery/Thriller. His epic works The Dark Tower, It, Pet Sematary, Doctor Sleep, and Firestarter are the basis for major motion pictures, with It now the highest-grossing horror film of all time. He is the recipient of the 2020 Audio Publishers Association Lifetime Achievement Award, the 2018 PEN America Literary Service Award, the 2014 National Medal of Arts, and the 2003 National Book Foundation Medal for Distinguished Contribution to American Letters. He lives in Bangor, Maine, with his wife, novelist Tabitha King.

Peter Straub was the New York Times bestselling author of more than a dozen novels, including A Dark Matter and The Talisman, which he co-wrote with Stephen King. He has won the Bram Stoker Award for his novels Lost Boy Lost Girl and In the Night Room, as well as for his collection 5 Stories. Straub was the editor of the two-volume Library of American anthology The American Fantastic Tale. He passed away in 2022 at the age of seventy-nine.