An Illustrated Reference to Manners & Customs of the Bible (Hardcover) 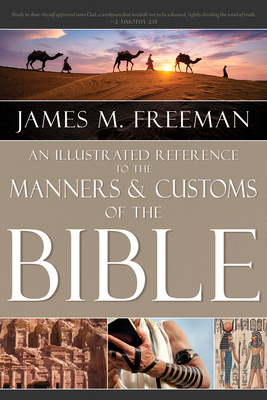 Any study of the Bible inevitably turns up situations that give us pause. We wonder: Author James Midwinter Freeman (1827-1900) takes you through the Bible, from Genesis to Revelation, to explain different Oriental manners and customs that were common to people in ancient times, some of which are still evident in the East today. An Illustrated Reference to Manners & Customs of the Bible is a handy reference book filled with more than 140 helpful illustrations and fascinating information that you will turn to again and again. It will greatly aid anyone wishing to increase their understanding of the traditions, customs, and observances of biblical times.

James Midwinter Freeman (1827-1900) was an American clergyman and writer. Born in New York City, he was educated at Wesleyan University and Mount Union College. He studied Latin, Greek, German, and Hebrew throughout his lifetime. Early in his career, Freeman was a printer and then a teacher, when he was called to ministry. In 1850, at age twenty-three, he was admitted to the New Jersey Conference of Methodist Episcopal Church. He received full membership and was ordained a deacon two years later. In 1854, Freeman was ordained an elder. He served as a pastor for twenty-three years, mainly throughout New Jersey. Freeman brought many to Christ during the great religious awakening of 1857 and 1858. In a memorial for the 1900 minutes of the church's Newark Conference, J. L. Hurlbut wrote, "He seemed an ideal minister, whether on the pulpit, or as pastor visiting my father's house, or in the Sunday school, where he was always present and was a born leader, or in the altar in the three months of continuous revival meetings, leading souls to Christ. I was not the only youth converted in that great revival under his ministry who became a minister." Freeman also wrote and edited Sunday school books and periodicals for the Methodist Episcopal Church, and served on several boards. His Handbook of Bible Manners and Customs was first published in 1874. He also wrote Use of Illustration in Sunday School Teaching (1867) and A Story History of the English Bible (1879). But Freeman is perhaps best known--albeit perhaps anonymously--for writing and publishing more than thirty children's books under the pseudonym Robin Ranger, beginning around 1862. These illustrated works include Up in the Garret, Out in the Garden, Summer Days, Sunshine Hall, The Magic-Lantern, Running Birds & Pigeons, and Robin Ranger's Picture Book. They were very popular with children of that era.