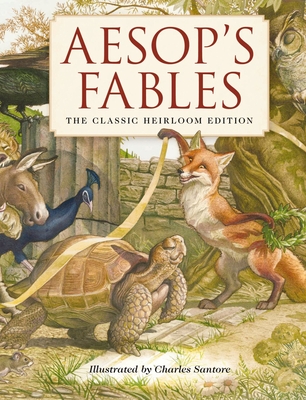 Revive your childhood wonder and fascination with the most exquisitely illustrated slipcased edition of Aesop’s Fables to hit the market in years—featuring breathtaking original artwork by #1 New York Times bestselling illustrator Charles Santore!

Captivating the hearts and minds of kids and adults for generations, Aesop, a former Greek slave, developed simple and meaningful adventures featuring animals or insects to teach a moral standard or lesson for living. This classic edition of short stories is brought to life with breathtaking illustrations by New York Times #1 Bestselling illustrator Charles Santore. The most well known and well loved of Aesop's fables are included to help boys and girls learn which traits are desirable and which are less than desireable, including:

The work of New York Times bestselling children’s book illustrator Charles Santore has been widely exhibited in museums and celebrated with recognitions such as the prestigious Hamilton King Award, the Society of Illustrators Award of Excellence, and the Original Art 2000 Gold Medal from the Society of Illustrators. He is best known for his luminous interpretations of classic children’s stories, including The Night Before Christmas, Alice's Adventures in Wonderland, Aesop's Fables, The Classic Tale of Peter Rabbit, The Little Mermaid, Snow White, The Velveteen Rabbit, The Wizard of Oz, and more!

Aesop was a Greek fabulist and storyteller credited with a number of fables now collectively known as Aesop's Fables.

Charles Santore renowned illustrations have been widely exhibited in museums and celebrated with recognitions such as the prestigious Hamilton King Award, the Society of Illustrators Award of Excellence, and the Original Art 2000 Gold Medal from the Society of Illustrators. Santore is best known for his luminous interpretations of classic children’s stories such as Snow White, The Night Before Christmas and Henry Wadsworth Longfellow’s Paul Revere’s Ride, which was named 2004 Children’s Book of the Year for Poetry by the Bank Street College Children’s Book Committee. His illustrations for The Wizard of Oz, which is widely considered to be the quintessential illustrated version, were used as the scenic backdrops for a major television performance of the work.