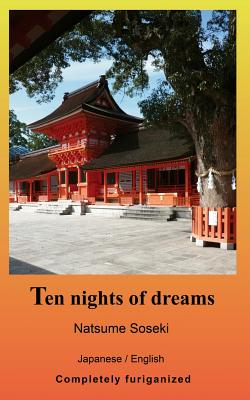 In ten terrifying, intriguing and thrilling dreams, Natsume Soseki (1867 - 1916) treats leitmotifs and antipodes such as: loyalty and treatise, love and death, fame and immortality, social outsiders, honor and loss of face, desperation and hope. Natsume Soseki carries us off into his dreams and the old Japan comes to life once again. The Japanese original text "Yume yuja" was completely set up with furigana in this two-language edition, so that every student of the Japanese language can read Natsume Soseki's Ten nights of dreams fluently. The dreams are commented to provide background information to the reader.

Natsume Soseki (1867 - 1916) was a Japanese writer and a full professor of the English language at the university of Tokyo. Natsume's main subject was the industrial revolution and its impact on the Japanese society and cultural life. In his novels he also focused on the conflicts between obligation and desire or loyalty and freedom of will. Soseki often refers to the Japanese way of life and the clash of civilizations that occurs, as western cultural elements influence the traditional Japanese culture. In many ways Natsume Soseki foresaw most of the problems that developed during the 20th century, as Japan prospers and becomes an open, modern and active country.